As one of Ireland’s rarest birds of prey, the long-term declines in Hen Harrier populations provides cause for concern, particularly given the important role this species has to play in our wild and rural landscapes.  Hen Harriers are renowned for their spectacular aerial courtship displays known as the ‘skydance’. Traditionally, Hen Harriers breed in open upland habitats, using heather, pre-thicket forest plantations or scrub for nesting while feeding on small birds and mammals.  Like many birds of prey, Hen Harriers are a valuable indicator of the health of our countryside. The 2015 National Survey of Hen Harriers (the fourth national survey since 1998-2000) has shown that the national population has experienced further declines, including within some former strongholds for the species.

The fourth national survey of Hen Harriers in 2015 was undertaken by a partnership of the Golden Eagle Trust, Irish Raptor Study Group and BirdWatch Ireland on behalf of the National Parks and Wildlife Service. Similar to previous surveys the 2015 national survey received enthusiastic support from a substantial network of voluntary surveyors including bird-watchers,  farmers, wildlife rangers, foresters and biologists with more than 250 fieldworkers dedicating over 7,000 hours collectively to the survey. This facilitated comprehensive coverage throughout the country and also allowed assessment of new areas not previously surveyed. Dr. Marc Ruddock, survey coordinator with Golden Eagle Trust, commented on the efforts involved ‘This is one of the largest surveys of its kind, and would not have been possible without the significant investment of so many skilled surveyors which is nothing short of phenomenal, that so many devoted their time and energy to the survey is hugely positive and demonstrates the passion that is out there to help understand and help conserve Hen Harrier populations in Ireland’. Ruddock continued: ‘to all those involved we extend our considerable thanks and appreciation.’ 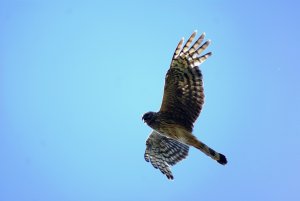 The current national population estimate of 108-157 breeding pairs in 2015 represents a decline of 8.7% since the 2010 national survey which recorded 128-172 pairs. Due to the increase in survey effort in 2015, the most accurate assessment of national population trends can be calculated through a comparison of Hen Harrier numbers in specific survey squares which were covered across the various national surveys.  These results indicate a decline of 16.4% in the national Hen Harrier population since 2010 (based on assessment of Hen Harrier numbers recorded within 139 10km squares surveyed in both 2010 and 2015) and 9.7% declines since 2005 (based on 110 10km squares covered in 2015 and 2005).  A comparison of the survey area (78 10km squares) which was covered in all four national surveys (since 1998) indicates that the population has fallen from 110-155 pairs during the first national survey in 1998 – 2000, compared with 95-130 pairs in 2015, which is an overall decline of approximately one third (-33.5%) over this 15 year period.

As top predators, the decline of Hen Harriers may be linked with declines in availability of their preferred habitat, changes in habitat quality and associated effects on food availability. It is likely that land-use changes over the past 50 years, which may have resulted in an increasingly fragmented and/or unsuitable landscape for upland breeding birds, may be impacting on the Hen Harrier. Other studies have shown similar declines in upland species such as Curlew and Red Grouse.

In 2007, as a requirement under the EU Birds Directive, Ireland designated six sites as Special Protected Areas (SPAs) based on their national importance for breeding Hen Harriers, including upland areas in counties Clare, Cork, Galway, Kerry, Laois, Limerick, Monaghan, Offaly and Tipperary, which together make up 2.3% of land area in the Republic of Ireland. Management of this SPA network requires that Hen Harrier populations are maintained and enhanced while also being compatible with stakeholder requirements. Supporting farmers and landowners, particularly within SPAs, to manage their lands using traditional and sustainable practices is key to Hen Harrier conservation. In 2015, harrier populations in several of the SPA areas were recorded to decline with an overall decline of 27.7% since 2005. Speaking of these trends, John Lusby, survey coordinator with BirdWatch Ireland commented ‘the fact that the SPA network holds 43% of known pairs in the country, which is a significant proportion of the population, shows just how important these areas are in the national context. The current survey results confirm that populations within parts of the SPA network are declining and without intervention through appropriate management further declines at certain sites are anticipated’.

Dr. Allan Mee, survey coordinator with the Irish Raptor Study Group, commented on the specific pressures faced by harrier populations. “There was a wide range of different pressures recorded in the national survey both within and outside SPAs, and many of these warrant further investigation. Pressures such as  forest maturation, clear-felling, wind energy production,  agricultural intensification, uncontrolled burning and degradation of important open habitats such as heather moorland, turf cutting, and recreational disturbance were all recorded by observers during the study. Mee continued “It is important to understand why some harrier populations may be declining and thus a comprehensive and scientifically robust action plan is needed to maintain or enhance existing Hen Harrier populations into the future.”

The results of the 2015 national survey will serve to inform the Hen Harrier Threat Response Plan which is currently in preparation through the National Parks and Wildlife Service with input from a wide range of relevant stakeholders. The purpose of this plan is to identify the main threats to Hen Harriers and identify integrated solutions and actions required for a sustainable management of the species.  If the plan is successful, it has the potential to deliver an effective framework for conservation of the Hen Harrier and other priority upland birds and habitats.

Irish Wildlife Manual No. 93. The 2015 National Survey of Breeding Hen Harrier in Ireland can now be downloaded from the NPWS website