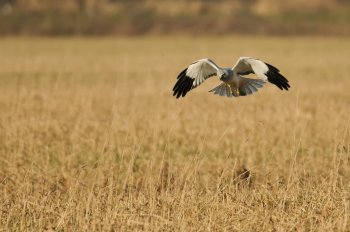 In the coming weeks as spring approaches the enigmatic hen harrier will begin displaying and looking for a place to nest in the uplands typically on deep heather moorland and in young forest plantations or scrub habitats. There is no greater sight than the “sky-dancing” display of the white-grey and black-wing-tipped male hen harrier showing off to the brown, more camouflaged, white-rumped females in spectacular undulating flights which rise and fall rapidly 100’s of metres in mid-air.

In 2015, the Golden Eagle Trust, Irish Raptor Study Group and BirdWatch Ireland have formed an exciting conservation partnership and collectively are co-ordinating the 2015 Irish Hen Harrier Survey on behalf of the National Parks & Wildlife Service of the Department of Arts, Heritage & the Gaeltacht.

The hen harrier is protected by the EU Birds Directive and listed on Annex 1 and as such monitoring, research and protected areas are a vital component for the conservation of the species. In addition, survey and monitoring data collected during national surveys are vitally important as these data are used by the government and other agencies to help inform management and conservation decisions.

Several regional declines were recorded during the last survey in 2010 and it is important that we re-survey to establish the status of the species in Ireland. This new survey will begin in April 2015 and in the coming weeks the project co-ordinators will be running a series of training workshops to help standardise methodologies and offer opportunities for new volunteer fieldworkers to get involved in helping to monitor the hen harrier population.

Similar to previous years the survey will examine all suitable hen harrier habitats during the breeding season (April to August) and look for evidence of hen harriers breeding or using these areas. It will be important for observers to record any behaviours that the birds are doing as well as their preferred habitats and any threats or pressures in the nearby areas.

To get involved in the volunteer training workshops please follow this link to indicate if you will be attending:

Workshops will be held at the following locations in coming weeks: